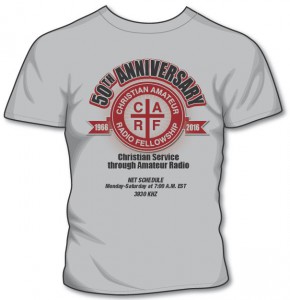 2016 marks the 50th anniversary of the Christian Amateur Radio Fellowship, which was formed at the North American Christian Convention in 1966 with the idea that the church should utilize the communication system known as Amateur (Ham) Radio.

To commemorate this milestone, a special shirt has been designed [order here] and a special certificate is available for those who check into the CARF Net on 3.930 MHz at 7:00am Eastern.

CARF will have a booth at the Dayton HamVention (#0213 North Hall) and we encourage all members who are able to make the trek to Ohio in May 2016.